International Dark-Sky Association Victoria Inc welcomes nominations of high quality lighting installations for its Good Lighting Awards. Nominations can be from people associated with the installation or from its users or from its neighbours.
When considering nominating please note the Principles of Good Lighting given below, appropriate to the type of lighting installation. All light fittings must comply with Australian Standards. In some cases nomination can be made even if not all the principles have been adhered to, as long as the installation is clearly better than similar ones nearby.

Light Pollution is an unwanted consequence of outdoor lighting and includes such effects as sky glow, light trespass, and glare. An illustration of both useful light and the components of light pollution are illustrated in Figure 1. Sky glow is a brightening of the sky caused by both natural and human-made factors. The key factor of sky glow that contributes to light pollution is outdoor lighting.

Light trespass is light being cast where it is not wanted or needed, such as light from a streetlight or a floodlight that illuminates a neighbor’s bedroom at night making it difficult to sleep.

Glare can be thought of as objectionable brightness. It can be disabling or discomforting. There are several kinds of glare, the worst of which is disability glare, because it causes a loss of visibility from stray light being scattered within the eye. Discomfort glare is the sensation of annoyance or even pain induced by overly bright sources. Think of driving along a dark road when an oncoming car with bright headlights suddenly appears. The sudden bright light can be uncomfortable and make it difficult to see. Discomfort and even disability glare can also be caused by streetlights, parking lot lights, floodlights, signs, sports field lighting, and decorative and landscape lights. 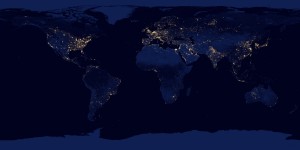