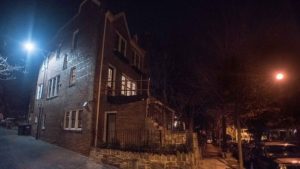 Like most of us, Karen Snyder had never really paid much attention to street lights. But that all changed last year when the city council began installing LED lights outside her home in a quiet corner of Washington DC.In addition to the light shining into her bedroom, the 63-year-old teacher’s guest room, where she watches TV, is now bathed in something akin to strong moonlight.

“It’s like there’s a ray coming in. Like a blue ray. Right directly on to the couch. If you are sitting down, the moon would be above the house and you’d get the beautiful feel of the moon. This is shining right in your eyes so it’s pretty different than a moon. Moons don’t go this low into the windows.”………..