On January 28, 2021, the International Dark-Sky Association (IDA) Board of Directors adopted a policy implementing the Five Principles for Responsible Outdoor Lighting

The main aim of IDAVic is to maintain the beauty of the night sky for generations to come and to support good lighting fixtures which are also environmentally friendly.

A current very important issue is that a number of Victorian Councils are upgrading to energy efficient lighting. 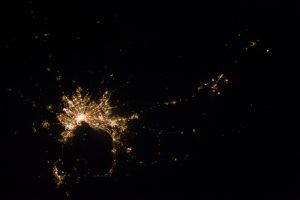 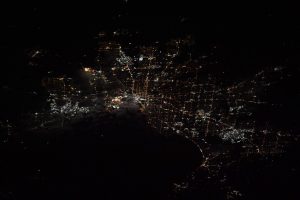 Melbourne at night taken by Jessica Meir ISS NASA 2020 2 7  shows  4000K LED installations in  place. The above  2 images are on different scales.

It is not surprising that Councils are looking at LED street lights as they have a number of financial benefits due to their low energy use, low maintenance costs and long lifetimes. However, they can have serious unintended environmental, ecological and health consequences so that thought and planning need to be put in before commencing a LED street lighting program.
Some Council Street Lighting policies are completely out of date. These policies need to be comprehensively revised with the inclusion of the environmental and health impacts of light at night before new lighting programs are contemplated.
The concern with LED lighting is that white-light LEDs emit a large component of blue light so that their light is referred to as blue-rich white light. Recent research in a variety of fields such as epidemiology, astronomy, land conservation and biology, as well as vision and lighting indicates potential serious consequences to such blue-rich white light at night. Unfortunately, such research seems to be generally ignored by the lighting industry. For example, the MAV Procurement recommended Sylvania 25W LED Street Light module has a correlated colour temperature of 5000K, indicating an exceptionally large emission in the blue part of the spectrum.
Potential problems due to blue-rich white light at night:
Environment – the large blue component gives a greater contribution to sky glow than warmer coloured light.
Ecology – the large blue component of the light has a disturbing impact on insects and on nocturnal animals.
Visibility – due to the large blue component of the light extra glare is perceived from the street lights reducing visibility for all. This is especially the case for older people whose eyes are likely to have yellowing lenses so that much of the blue light does not reach into their eyes.
Human health – blue light at night suppresses the hormone melatonin disturbing the normal human circadian rhythm as well as the immune system. There is now considerable evidence indicating that light at night, especially blue light, is a risk factor for breast and prostate cancer.
A useful document outlining these issues is provided by IDAVic courtesy of the International Dark-Sky Association at Seeing Blue
As mentioned above, it is recommended that Councils do not commence an LED street lighting program until properly revising its Street Lighting policy. Afterwards Council should look at independently sourcing LED street lights with a warmer colour (correlated colour temperature of 3000K) in order to minimise the potentially dangerous emission of blue light in suburban streets and into the bedrooms of residents. Ideally, the street lights should include control gear that in the future, they could be dimmed or even switched off late at night when there is little pedestrian or vehicular traffic that require them.
Contact your Council to find out their plans for street lighting. If you have any questions, you can contact IDAVic at good.lighting (at) darkskyvic.org

IDSW 5th -12th April IDSW Activity at the Ballarat Observatory was agreat success. The winner of our nationwide competition is Liam from St Albans shown here with his new telescope. READ MORE

Back in spring under the first UK lockdown, I went on numerous night walks in my home city of Manchester. I was struck by several things. Without traffic or trains, birdsong prevailed in... READ MORE

The IDA Vic AGM will be on 6th December 2020, 11.00am. Register in advance for this meeting:https://us02web.zoom.us/meeting/register/tZYkd-CtrzgiHtM3Dmd2Gb7h8oqhhZVjWboq After registering, you will receive a confirmation email containing information about joining the meeting. READ MORE