Preserving the natural night time environment at The Honeysuckles

The award was presented at the Council meeting on the 20th June 2017, to the Mayor Cr Carolyn Crossley, by Judith Bailey Secretary IDAVic. 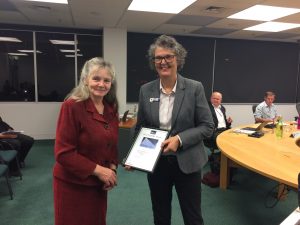 June 2017 Bruce Renowden, a local resident comments on the process:

“The Honeysuckles is a coastal hamlet in Gippsland covering several square kilometers in area with a permanent population of around sixty residents, plus part-time residents. It is located two and a half hours drive east of Melbourne.

What characterizes the area at first glance are the expansive areas of banksia bush land interspersed between houses. In addition, all the streets are unmade – with no curbing or channeling and there are no streetlights operating. We are left with a rare combination of almost unspoiled rustic and beachside beauty in a residential “neighbourhood”, which many of the small population understandably love and are passionate about retaining.

From time to time, such communal areas can become subject to discussion on “upgrades” or “improvements” which might be brought to an area for its so called betterment. When street lighting was routinely proposed, many of the residents both full time and part-time responded to voice their strong opposition. The perceived small benefit of permanent street lighting in such a location was far outweighed by the considerable value to the community, generally, of not having them. Beautiful natural skies at night, flora and fauna (and residents) not disturbed by all-night lighting in a country environment, not to mention the costs of installing and maintenance to the local Council authority and thereby ratepayers, are all winners.

The Shire of Wellington Mayor and Councillors listened to the case for “No Street Lighting At The Honeysuckles” sympathetically, understanding that blanket policy implementation in such policies as street lighting, can result in undesirable and wasteful outcomes. Change does not always improve amenity. They voted overwhelmingly against the proposed installation.

Not only residents, but visitors marvel at The Honeysuckles and its remarkable beachside/country feel.

We are very grateful to the Shire for its progressive approach, going against a tide of “progress at all costs” attitude, permeating our world today. As is frequently the case, less has yielded more.”

‘Wellington Shire Council are most worthwhile recipients of the Good Lighting Award from the Victorian Chapter of the International Dark-Sky Association.’